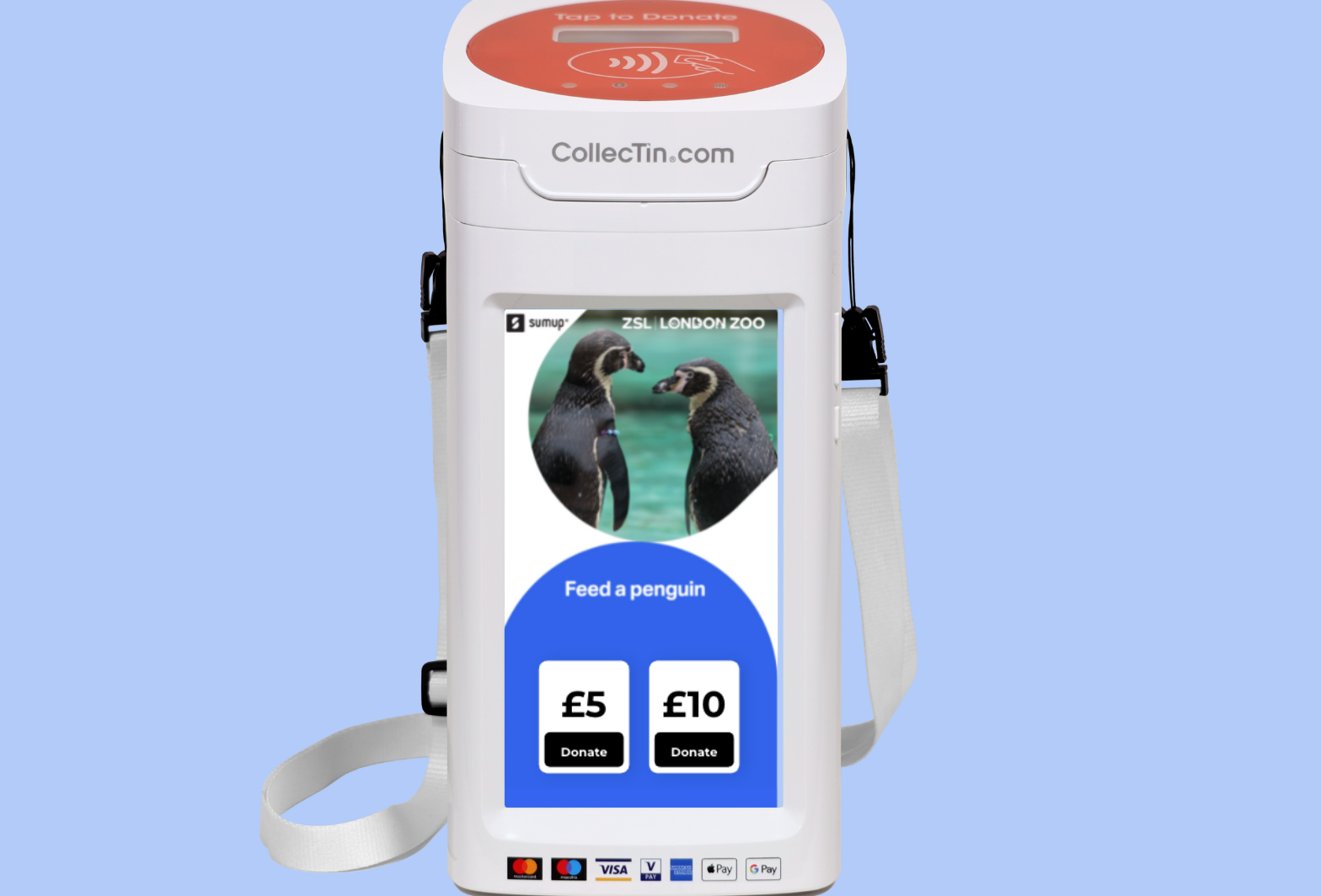 Like many charities, ZSL was forced to launch an emergency appeal during the pandemic. The need to urgently raise funds provided the ideal opportunity to introduce a new way for visitors to make cashless donations when visiting.

Like many charities, ZSL was forced to launch an emergency appeal during the pandemic as it had to close both its London and Whipsnade Zoos to visitors. The need to urgently raise funds to compensate for millions of pounds of lost visitor income in tandem with the reduction in cash donations provided the ideal opportunity to introduce a new way for visitors to make cashless donations when visiting.

Hannah Eaton, Individual Giving Marketing Manager at ZSL, explains: ‘After lockdown donations were more important to us than ever to support the care of our 30,000 animals and to help us continue our global conservation work. So Autumn 2020 proved to be a good time to introduce new cashless methods of supporting our charity.’

ZSL opted to set up seven fixed CollecTin donation kiosks, all of which are installed with the Give A Little point-of-donation platform. There are four kiosks in London Zoo and three in Whipsnade Zoo and they are situated in sheltered areas near to the animal exhibits for lions, tigers, penguins, gorillas, giraffes, elephants and butterflies.

Hannah continued: ‘We found that cash donations in our Zoos were declining over time as people started to carry less cash. We were therefore looking for an alternative way for our visitors to be able to support the animals in the Zoos and our wider conservation work during their visit. There is always a lot to see on a day out in the Zoo, and many of our visitors are family groups, so it was important to us that the donation options available to visitors were quick and easy to use, so that visitors could easily support us as a charity without taking time away from their family day out.’ 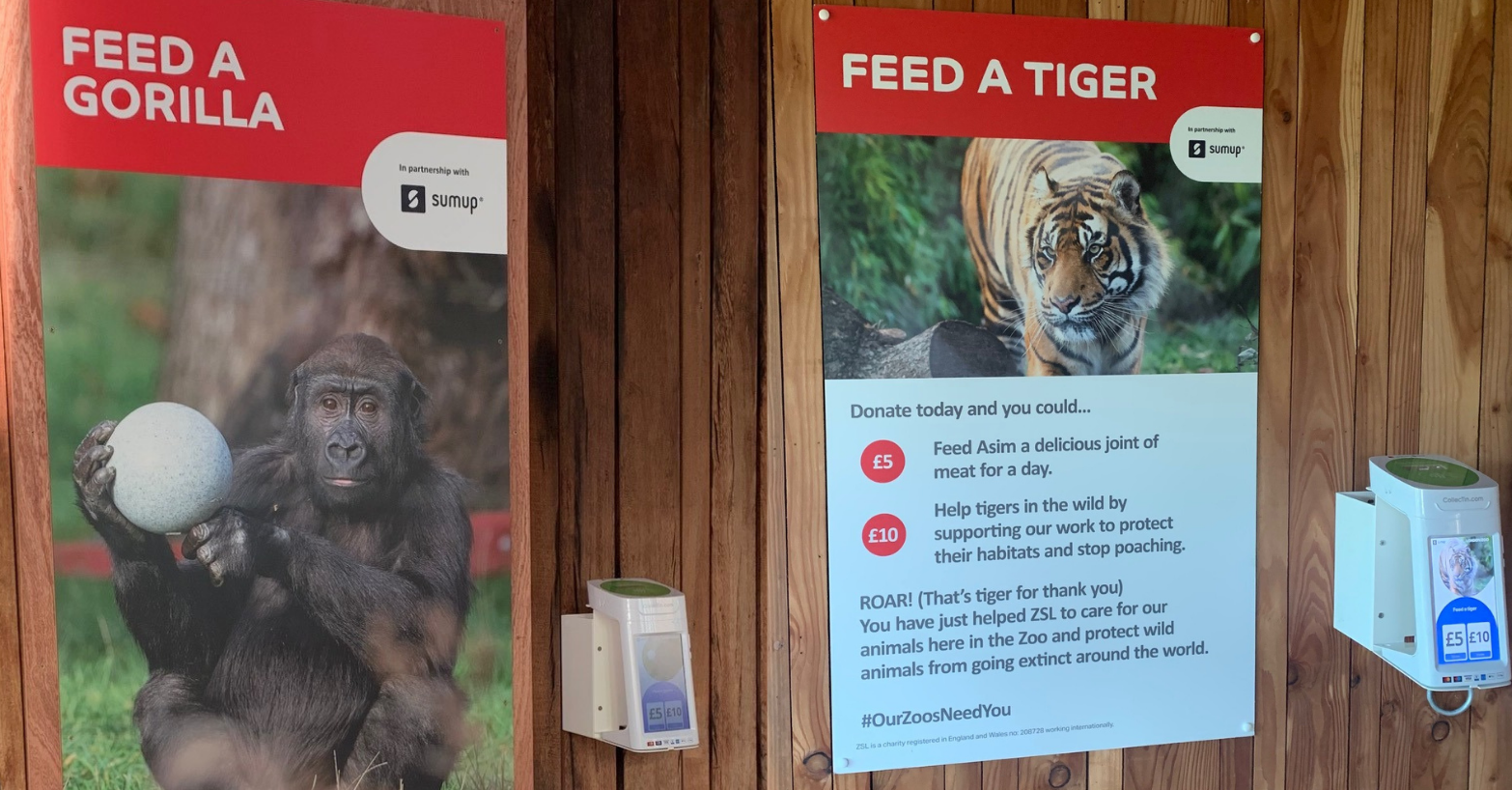 ‘We also wanted to be able to position the donation points close to some of our most popular animal exhibits, so that visitors could support specific species such as penguins or elephants, if they felt a particularly strong connection to these animals. So, we were looking for donation points which could be permanently positioned in these areas, without the need for them to be manned by a member of staff or volunteer.’

Giraffes are proving the most popular when it comes to cashless donations at Whipsnade Zoo, and tigers at London Zoo!

The ability to create as many engaging campaigns as needed on the Give A Little platform was particularly appealing to ZSL as they were keen to tailor each donation kiosk to the animals nearby. For example, there is a penguin campaign on the donation kiosk at London Zoo’s Penguin Beach, which meant that images of the penguins could be displayed on the donation screen, alongside a £5 donation ask to cover the cost of fish for the penguins, and a £10 donation ask to help penguins in the wild by supporting ZSL’s work to stop plastic pollution entering the ocean.

On which animals are currently proving most popular with regards to donations, Hannah revealed that the giraffes and tigers were doing particularly well!

‘The donation points which have raised the most money are in areas of the Zoos with the longest visitor dwell time. For example, our giraffe and tiger donation points have been popular, and these are both positioned in warm, indoor areas where visitors can clearly see and connect with these animals. Using different campaigns for the different exhibit areas also means that we can track which species are getting the most support from donors, which is useful information to inform our fundraising plans.’

Donors also appear to be responding well to the new cashless technology as Hannah explains:

‘We’ve seen a great response from our visitors to the contactless donation points in our Zoos, with new donations coming in every day. We’ve also seen donation revenues increase thanks to using Give A Little and CollecTin, especially during busy weekends and school holidays.’

On whether she would recommend Give A Little to other charities, Hannah added:

‘Yes I would recommend Give A Little to other charities, as the platform gives you flexibility to A/B test donation asks and to quickly switch between campaigns. The online dashboard is also very useful, as you can easily see how your different campaigns have performed over time.’

And when asked what advice she would give to charities looking to start their cashless donation journey, Hannah had the following recommendations:

‘Start by giving your supporters options of different areas to support, to learn what most appeals to them. For example, we have used Give A Little’s campaign feature to show donations related to seven different species. We also gave our visitors the option to donate £5 to cover the cost of feeding the animal, or £10 to support the species’ conservation in the wild. By taking advantage of these Give A Little features, we’ve been able to see what our visitors are most interested in supporting, which will help to inform our future fundraising plans.’