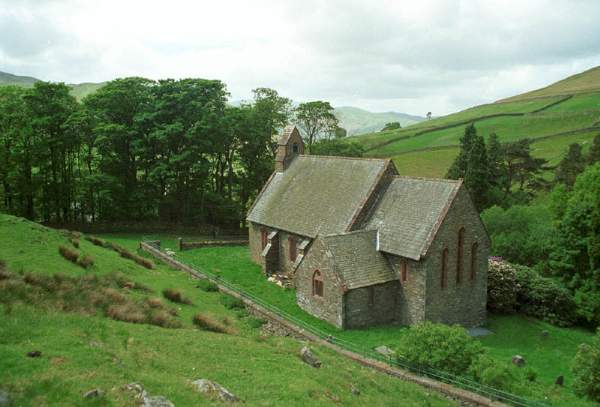 St Peter’s Martindale is a rural church in Cumbria with a small congregation that is popular as a stop-off for walkers exploring nearby fells in the Lake District.

St Peter’s Martindale is a rural church in Cumbria with a small congregation that is popular as a stop-off for walkers exploring nearby fells in the Lake District. Like many churches, St Peter’s has seen donations falling in part due to the pandemic but also due to people being less likely to carry cash. While the small congregation supports the church with regular donations, the church has always relied on additional cash donations from walkers and attendees at special services who have a connection with the church.

In order to give visitors the ability to give cashless donations, PCC Member, organist and former IT worker, Janet Hornby convinced the PCC to try out a CollecTin donation kiosk which is installed with the Give A Little point-of-donation software platform. The fact that there was no broadband or mobile connectivity didn’t put Janet off. She explains:

‘The church is on the top of the pass and broadband only comes as far as a local hotel, which is a mile away, so we managed to get mobile wifi using a high-gain antenna affixed to the gutter. There are some good walks around the valley and people often park outside the church and have a look inside. Many are not regular church goers and are attracted to it as it’s peaceful and they come in to see the stained glass windows. Previously, they might have put £1 into the wall safe but now thanks to the contactless option, they are giving more - we get average donations of £4. We also make the Wi-Fi available to visitors so they can check emails - we’ve even had people check into their flights home from there! It feels like we’re making a resource available to people and that it could be used in an emergency.’

According to Janet, donations have doubled since they started using the CollecTin and Give A Little: ‘We’ve raised over £1400 since we started ten months ago, so it’s proving to be a valuable income stream for us.’

Janet adds: ‘Because of the remoteness and beauty of the valley where the church is located, we tend to get some regular visitors who have been coming here every year since they were children. We have a monthly Evensong service and couples who have previously got married here will often come and want to make a donation. At one evensong, we have five couples who had been married in the parish, including the retired vicar!’

Give A Little is also enabling the church to allow people to donate via the church’s website and Janet has also used the QR code feature at a recent carol service as it attracts a larger crowd and meant that people didn’t have to queue to use the CollecTin.

On why she would recommend Give A Little to other churches, Janet said: ‘I would recommend Give A Little to any church looking to start collecting cashless donations. It’s especially useful for churches who get a lot of visitors they don’t know like we do. It’s a way of giving them the opportunity to donate because there are lots of people who don’t go to church but who still have a need for something spiritual and it provides an opportunity to draw attention to the fact that church is there when it’s needed. It helps with outreach and it’s a way in for some people. I would advise my fellow parishes to persevere with cashless giving. I know some parishes who haven’t brought their CollecTin out of the vestry yet or logged into the Give A Little platform and I always say, plug it in, it works!’

Summing up the value of embracing new cashless technologies, Janet said: ‘The CollecTin and the ability to control it remotely through the Give A Little platform has proved to be a lifeline. With such a small congregation, keeping going during the pandemic has been tough, but having this device has meant that we’ve been able to continue. From my home, with the daily reports I receive, I know that it is up there, in the hills, working away for us in our beloved church. Being able to access the device remotely is wonderful. I love the fact that I can change the message on the screen from my home through the Give A Little platform - I often will add something like happy Christmas or remind people that a service is taking place on Sunday - that’s a really great feature.’